Something that I would love to have in Magic is the level of transparency Hex has provided in their non-rotating format “Immortal”. Not only do they provide a reason for the things that they ban, but they let the players know which items are on a “Watch List” for potential bannings in the future. This way when new players are looking to invest in a non-rotating deck they have the knowledge up front if they should be worried about their purchase being banned in the near future.

Hex leverages the fact that it is a digital game to allow everyone to mulligan less. Using a probability distribution Hex takes all of the possible opening hands a given deck can produce and eliminates the 10% most resource light hands and 5% most resource dense hands from being possibilities.

This means a large portion of your hands that would be automatic mulligans simply do not exist. Everyone mulligans less and more actual games are played.

In Hex each player selects a champion when building their deck. Each champion has a power that you can activate after collecting enough “charges”. Each resource you play in Hex provides one of these charges in addition to providing a normal resource / color identity. These powers do everything from drawing cards to impacting the board directly: 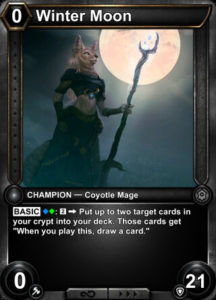 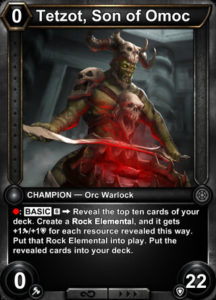 Because Hex is a digital only card game it is not bound to using game mechanics that are easy to implement in paper / are necessary to ensure people are not cheating. Both of these cards would be difficult to resolve “honestly” in a competitive paper card game: 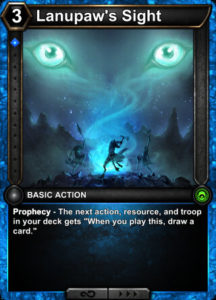 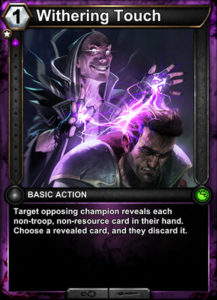 Because the computer is tracking things instead of people, cards that get modified can be tracked across zones in Hex. Cards you take control of from your opponent’s board can be put into your discard pile or even shuffled back into your deck. Cards that would create tokens in Magic create actual cards instead. These created cards can be discarded or returned to your hand – instead of just ceasing to exist like a token.

When you hear Magic compared to other digital card games you often hear the defense “Magic is more complicated than other games” for why MTGO is poor software. Hex is easily as complex as Magic is in terms of game play, and while Hex is not perfect, it looks and feels like a modern piece of software.

In addition to having a free to play ladder with competitive match making based on MMR, Hex has regular events that pay out cash prizes that you play from home.

If you want to learn more about how Hex works and the events they have you can check out my intro piece here. If you want to start playing Hex yourself for free you can go download it on Steam now.